How to model token allocations and distributions

Translating tokenomics into a forecast of changing allocations over time.

First, a disclaimer: I am not a lawyer or a financial advisor and am not offering financial or legal advice.

Crypto refers to digital currency created by cryptography, a mathematical technique to secure information by changing it into a form that is unreadable without knowing how it was encoded. This is used to create digital currency that is created, exchanged, and overseen by a distributed peer-to-peer network.

Crypto exists on a blockchain, a digital ledger of transactions, designed to be transparent, permanent and immutable. Bitcoin is the most well known implementation of crypto on a blockchain, thousands of other examples abound.

What changes with crypto? #

Crypto companies are companies with traditional legal status and ownership structures, and may have a token that is distributed and traded by people (possibly, users of its products).

Protocols may have a company behind them, or may not, may be run by a DAO, or may not (at least not yet), may be public or anonymous, and will have a token that is distributed and traded by people.

This is a nascent space, and the ”standards” are still actively evolving.

Often the investors into crypto companies will require (via side letter, typically) the rights to purchase tokens (if they are already traded or not) or share in the distribution of tokens (if they do not exist yet). Investors in the equity of a company have to be accredited investors, and in the case of direct token purchase, often have to be qualified clients / qualified purchasers.

The “standard” structure for investing into crypto companies is still evolving, but the SAFE + token warrant structure is common at the moment. The SAFE is for the investment into the company, the warrant provides the right (not the obligation) for investors to purchase tokens, if the company decides to offer tokens, at a price typically to be determined later, for a percentage of the tokens allocated to either (a) everyone or (b) investors (or some mixture of investors, treasury, and team).

Typically crypto companies will have a large reserve of tokens for the community, to incentivize network participants, often airdropped to various people to bring them into the community.

Initial coin offerings may be used to sell tokens to early users (speculators?), noting that many countries have restrictions on who can buy tokens through these offerings.

Tom Tunguz's The Two Cap Tables of Crypto Companies: What They Are and How They Relate to Each Other explains this well. 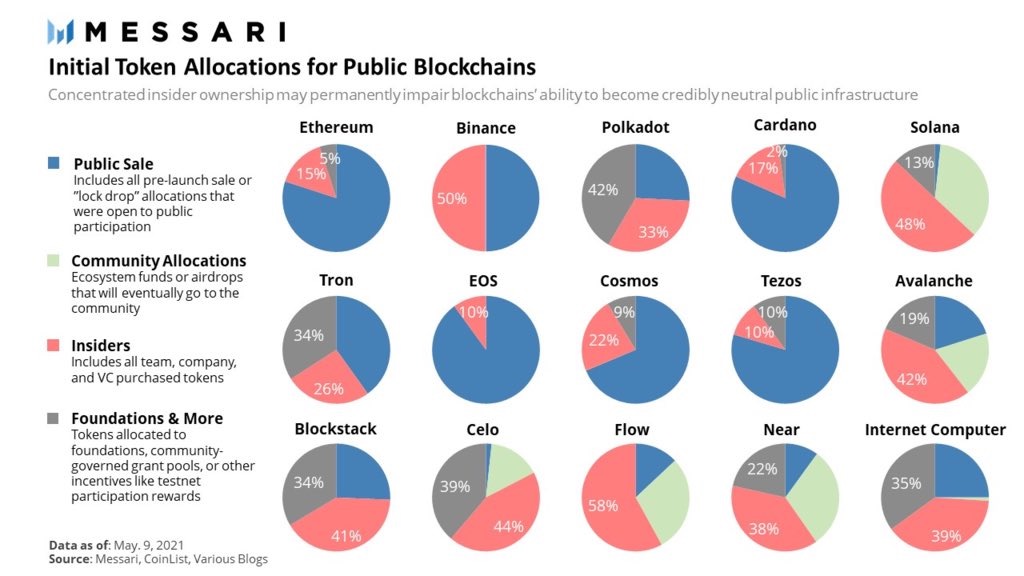 Token holders of a DAO have governance rights, meaning the right to propose ideas for the organization to do, and the right to vote on these proposals.

From a modeling perspective, what we are typically doing is modeling the initial allocation and the distribution of tokens over time. This represents the project's tokenomics; starting from an initial allocation, how will the tokens be distributed over time to various parties, based on a forecast of the project fundamental structures for issuing, earning, and burning tokens over time.

Typically we are not modeling price, which can be exogenous from the protocol’s underlying operations because of speculation.

You'll be redirected to my email provider to confirm. Unsubscribe anytime. Here's how I use your data.